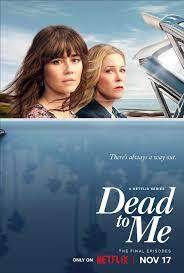 Liz Feldman, Will Ferrell, Adam McKay, and Jessica Elbaum serve as the executive producers of the American black comedy television series Dead to Me. A second season of the show was ordered by Netflix in June 2019, and it debuted on May 8, 2020, with 30 episodes. Applegate was nominated for Outstanding Lead Actress in a Comedy Series at the 71st Primetime Emmy Awards.

Dead to Me Season 2 Episodes Subtitles:

More About Dead to Me Season 2:

The caustic widow Jen recently lost her husband in a hit-and-run, and she is desperate to solve the case. Judy, a cheerful free spirit, just had a sad loss of her own. Despite having completely different personalities, the women connect at a support group and wind up being unlikely friends.

Judy tries to protect Jen from learning a devastating secret that could end her life as she knows it as the ladies become closer over glasses of wine and a common love of “The Facts of Life.” The cast of the dark comedy, which tackles the oddly humorous aspects of grief, loss, and forgiveness, includes TV veterans Ed Asner and Christina Applegate.

The black comedy centres on Jen and Judy, who become close friends after meeting at a grieving support group. After Ted was killed in a hit-and-run, Jen became a widow and was still processing her loss. In reality, Judy was the hit-and-run driver who killed Jen’s husband and was persuaded to leave the scene by her abusive ex-fiancé Steve. Judy claimed she is grieving for her husband who passed away from a heart attack. In the multi-award-winning series, Jen gradually loses her mind while trying to learn the truth about her husband’s passing and the secrets Judy is holding.