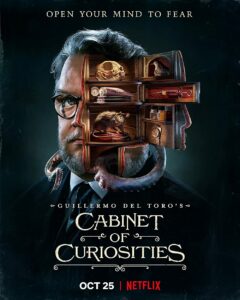 A horror anthology streaming television series produced by Guillermo del Toro for Netflix is titled Guillermo del Toro’s Cabinet of Curiosities. It includes eight contemporary horror stories written in the Gothic and Grand Guignol traditions. While the others are written and directed by different filmmakers, two are co-authored by del Toro himself. The debut date was October 25, 2022.

How to Get Guillermo del Toro’s Cabinet of Curiosities Season 1 SRT:-

Guillermo del Toro, the master of horror, gives his well-known name to an assortment of eerie stories directed by seasoned professionals and budding rookies, each fascinating artefact adding up to a treasure mine of gothic storytelling. The eight unorthodox and genre-defining frightening narratives in Guillermo del Toro’s Netflix horror anthology series, which ranges from the macabre to magical, gothic to grotesque, or just eerie, are meant to challenge conventional ideas of horror.

Del Toro created two of the eight stories on his own. A man purchases a storage unit full of enigmatic artefacts to sell in order to pay off his debt but quickly finds himself in a precarious predicament. A grave thief attempts to steal the belongings of a wealthy newcomer in the cemetery, but he or she must first

In order to piece together a series of terrifying incidents, an experienced sheriff investigates a dead body in the woods and consults with an old friend who is a medical examiner.
Ornithologists Nancy and Edgar travel to a remote house to study Dunlins while grieving a significant loss, but the history of the property reveals heartache and terror..