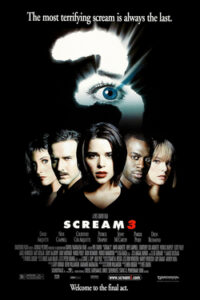 Here we have provided Scream 3 Subtitles on Subdl. You Can Get Scream 3 subs easily and download them to watch. You will get all Scream 3 subs in SRT Format, Our version works with every format you might want to watch ranging from Mp4, Avi, Blu-ray, DVD Rip, HD Rip, HDTV,  720P, 1080P, 4k, and a lot more.

American slasher movie Scream 3 was released in 2000. It was written and directed by Wes Craven. Neve Campbell, Courteney Cox, David Arquette, Patrick Dempsey, Parker Posey, Scott Foley, Lance Henriksen, Matt Keeslar, Jenny McCarthy, Emily Mortimer, Deon Richmond, and Patrick Warburton are among its stars. It was initially the final part of the series before the Scream franchise was revived in 2011 with a sequel, Scream 4. Scream 3 was released as the franchise’s third episode.

Another Ghostface killer emerges to terrorise them as Sidney and her pals visit the Hollywood set of Stab 3, the third movie based on the Woodsboro murders.

The final instalment of the “Scream” trilogy is filmed in Hollywood, and Gale Weathers and Dwight Riley are present on set to serve as Jennifer Jolie’s counsellors. Unfortunately, the cast is murdered according to the script, leaving just ‘Sid’ Prescott, who is currently hiding until the murderer finds her, to figure out the mystery.

Sidney and the other survivors are once more lured into a game of horror movie mayhem when bodies start dropping around the STAB 3 set, a film based on the horrific Woodsboro killings. Someone wearing a ghost mask starts murdering the new cast members as “Stab 3” is being made. As a result, Sidney emerges from her home in the woods where she has been hiding, and she travels to Hollywood to confront the killer in the climactic scene.