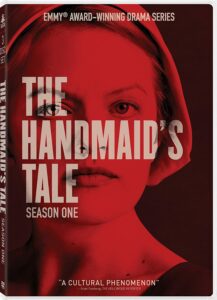 Based on Margaret Atwood’s 1985 novel of the same name, The Handmaid’s Tale is an American dystopian television series produced by Bruce Miller. Hulu, a streaming provider, placed a straight-to-series order for 10 episodes of the show. featuring Joseph Fiennes, Yvonne Strahovski, and Elisabeth Moss. It became available on April 26, 2017..

How to Get The Handmaid’s Tale Season 1 SRT:-

More About The Handmaid’s Tale Season 1:

A Gileadan officer and his wife have June as a concubine, and she is fertile. She is compelled to abide by their stringent guidelines, but she hopes to one day be set free and reunited with her daughter. The plot starts roughly in the current day in Boston where June (Elisabeth Moss), a recent college graduate and closest friend of Moira (Samira Wiley), works for a publishing house.

At a hot dog stand, June meets Luke (O-T Fagbenle), and the two start dating secretly. Eventually, Luke leaves his wife for her, and they get married. Hannah, June and Luke’s infant daughter, is briefly taken from the hospital by a deranged mother who is unable to bear her own children. America is experiencing a reproductive crisis as a result of a major decline in birth rates and an increase in birth abnormalities. Maternity wards are deserted, and outside, candlelight vigils are organised to pray for successful deliveries. Additionally, unpredictable weather patterns and poor harvests have disrupted the nation’s supply chains.

Offred discovers in the season finale that her husband, Luke, did not die when they were split up but rather sought asylum in Canada. Offred finds she is pregnant as well, but she is unsure if the child is Nick’s or the Commander’s. Additionally, Moira makes a second successful escape and is accepted as a refugee in Toronto, Canada. She finds Luke there, and together they hatch a plan to get Jude back.