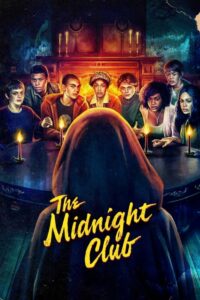 Mike Flanagan and Leah Fong are the creators of the American horror mystery-thriller streaming television series The Midnight Club. Netflix released The Midnight Club on October 7, 2022. It is not a miniseries, in contrast to Flanagan’s other three series. The eight Midnight Club members are played by Iman Benson, Adia, Igby Rigney, Ruth Codd, Aya Furukawa, Annarah Shephard, William Chris Sumpter, and Sauriyan Sapkota in the television series. Older people working at or residing close to the hospice are played by Heather Langenkamp, Zach Gilford, Matt Biedel, and Samantha Sloyan.

How to Get The Midnight Club Season 1 SRT:-

More About The Midnight Club Season 1:

The Midnight Club, a story of terminal teenagers told with jolts and joie de vivre, continues Mike Flanagan’s hot streak of emotional horror stories. Eight members of the Midnight Club gather each night at midnight at a manor with a shadowy past to share ominous tales and search for evidence of the supernatural.

The season consists of a total of 10 episodes, each of which features a unique story with a unique scenario recounted by the midnight club members. The title of each episode changes depending on the story that is depicted in it.

The following are the names of the episodes: The Final Chapter, The Two Danas, The Wicked Heart, Gimme a Kiss, See You Later, Witch, Anya, Road to Nowhere, The Eternal Enemy, and Midnight.